If I could be famous for anything,what would it be?Why? 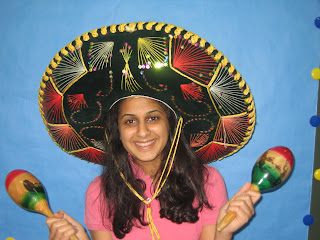 If I could be famous for anything I would want to be famous for my jokes, I want to be a famous comedian. I want this more than I want anything else, because when people laugh at my jokes it makes me feel so good inside. I wouldn’t want my occupation to be a comedian, but I want to do this for fun when I’m studying in college. Jokes to me are one of the most important things in the world and laughter is like music to my ears. One of the most important things about my jokes is that they make other people feel happy. I mean, think about it if you had such a tiring day at work, wouldn’t you want to come to a joint and listen to Samar Al Ansari’s jokes. Some people say that jokes are silly but I want to prove them wrong and point out that jokes have an important role in our society. I want to make up jokes that are suitable for kids and adults at the same time. When I’m walking down the streets, I want people to point and whisper, “That’s Samar.” My comedian name will still be Samar, because it’s a very pretty name. I also want to show people that being a comedian, isn’t a very silly and stupid job, you have to write the jokes and most importantly have “spunk”. That’s one of my most important goals and I hope that one day it will come true to make me and other people happy.
Samar Al Ansari
Class 7 C 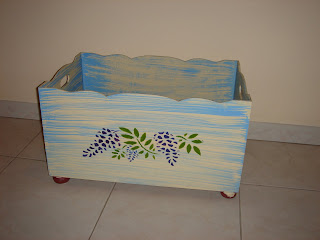 My Hopes and Goals for Grade 7

My hopes and goals for grade seven are:

I hope to be quieter and more attentive in class. I don’t want my grades to drop, and I want them to be as good or even better than last year. I also hope that teachers don’t give us very hard work. I want to live up to my expectations, and be the best student I can be. I hope that the lockers won't always be crowded, but I know that will never happen. I hope I also get used to the change of lifestyle around here. My biggest goal ever this year is to remain friends with my friends in different classes. I want to be in the tennis club this year and in the football club. I hope all of these come true, let me rephrase that! I will try my best to make them come true.

When a person you love passes away

Look to the night sky on a clear day.

The star that to you, appears to be bright,

Will be your loved one,Looking upon you during the night.

The lights of heaven are what shows through

As your loved one watches all that you do.

When you feel lonely for the one that you love,

Look to the Heavens in the night sky above.

Author unknown
Posted by Um Samar at 12:04 AM No comments:

A Poem That Gives You Goosebumps...
A drunken man in an Oldsmobile
they said had run the light.
That caused the six-car pileup
on 109 that night.
When broken bodies lay about
and blood was everywhere,
The sirens screamed out eulogies,
for death was in the air.
A mother, trapped inside her car,
was heard above the noise,
Her plaintive plea near split the air,
"Oh, God, please spare my boys!"
She fought to loose her pinned hands,
she struggled to get free,
But mangled metal held her fast
in grim captivity.
Her frightened eyes then focused
on where the back seat once had been,
But all she saw was broken glass and
two children's seats crushed in.
Her twins were nowhere to be seen,
she did not hear them cry,
And then she prayed they'd been thrown free,
"Oh, God, don't let them die!
Then firemen came and cut her loose,
but when they searched the back,
They found therein no little boys,
but the seat belts were intact.
They thought the woman had gone mad
and was traveling alone,
But when they turned to question her,
they discovered she was gone.
Policemen saw her running wild
and screaming above the noise
In beseeching supplication,
"Please help me find my boys!"
"They're four years old and wear blue shirts,
their jeans are blue to match."
One cop spoke up, "They're in my car,
and they don't have a scratch."
"They said their daddy put them there,
and gave them each a cone,
"Then told them both to wait for Mom
to come and take them home."
"I've searched the area high and low,
but I can't find their dad."
"He must have fled the scene,I guess,
and that is very bad.
"The mother hugged the twins and said,
while wiping at a tear,
"He could not flee the scene,
you see,for he's been dead a year.
"The cop just looked confused and asked,
"Now, how can that be true?
"The boys said, "Mommy, Daddy came
and left a kiss for you."
"He told us not to worry
and that you would be all right,
"And then he put us in this car with
the pretty, flashing light.
"We wanted him to stay with us,
because we miss him so,"
"But Mommy, he just hugged us tight
and said he had to go."
"He said someday we'd understand
and told us not to fuss,"
And he said to tell you, Mommy,
"He's watching over us."
The mother knew without a doubt
that what they spoke was true,
For she recalled their dad's last words,
" I will watch over you."
The firemen's notes could not explain
the twisted, mangled car,
And how the three of them escaped
without a single scar.
But on the cop's report was scribed,
in print so very fine,
"An angel walked the beat tonight on Highway 109"
Author Unknown
Posted by Um Samar at 7:09 PM No comments: 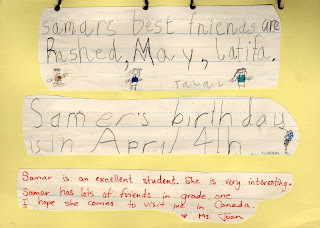 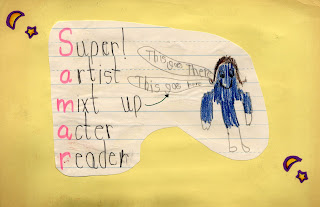 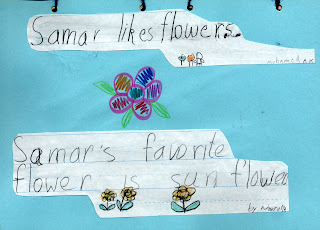 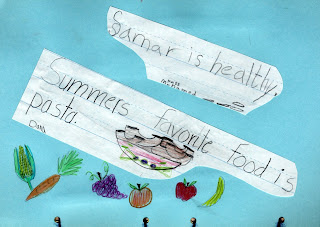 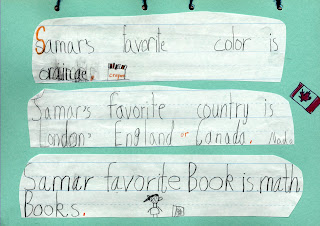 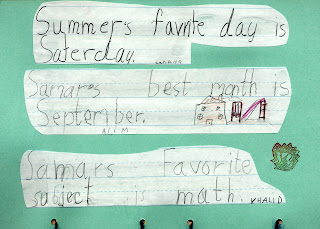 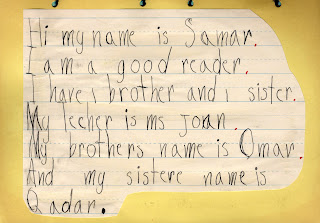 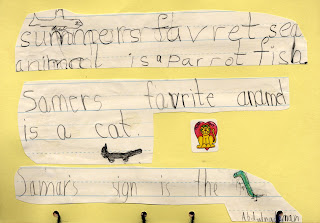 SAMAR is a Special Person

How Much I Miss You

Do you know my beloved daughter Samar, how much I miss you?
Do you have any of my news? I wonder.
And how I long for a look from your eyes
And how I wish, even for one last time, to kiss you from head to toe
And how I miss that beautiful smile.
Oh how my hands pine to touch your face,
Wishing if time could only bring you back, merrily playing with your siblings.
Do you know that my comfort is in your notebooks, papers and what you have written?
I read every line and my memory takes me to what your eyes read
And that I now wear the bracelet and watch that adorned your wrist.
Do you know that I pray each raqa’a in your room and direct my dua’a to you?
My yearning pulls me to sleep in your bed hoping to dream of your smile,
And to live moments with you, hugging you and kissing your cheeks.