The Heroine of this play is Juliet. Juliet is the one who had to make all the major decisions and truly act like a woman. Everything was so simple for Romeo, but Juliet was the one who had to make sacrifices. First of all, Juliet was strong enough to disobey her father by refusing to marry Paris. Some might say that she ended up obeying her father at the end, but that is because she didn’t want to sacrifice yet another precious thing in her life. Juliet was not the type of person to weep over what has passed, but she was a person who took action. She went to Friar Laureee and asked for advice, then made a decision that will for sure affect the rest of her life. She decided to fake her death and lay in the Capulet tomb for about 2 days; I don’t know how more courageous you can get than that. Finally, unlike Romeo who was a chicken and drank poison to kill himself, Juliet killed herself by plunging a dagger into her flesh and dying a painful death. No one would choose a painful death over a peaceful death; Juliet did. Juliet was willing to sacrifice anything to the one thing she believed in, love.


In my opinion, Romeo didn’t understand love, and wasn’t sacrificing enough for Juliet. Everything bad in this play happened because of Romeo. Romeo constantly ran away from his problems, but Juliet had to face them like a true lady. Some might say that Juliet was a woman and Romeo was a boy. Juliet is a truly amazing character, who I look up to because she teaches us never to give up. 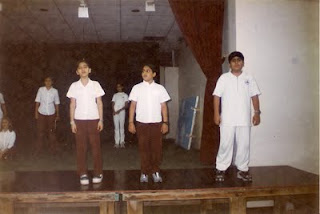 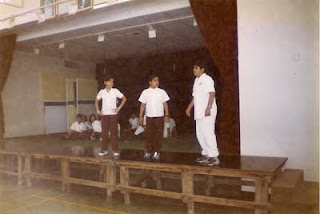 Photos of Samar playing a leading role during the prepartaions of the" Beauty and the Beast "play in May 2000 at Ibn Khuldoon National School.
Posted by Um Samar at 11:47 AM No comments:

At the age of 12, Darius went to Scribal School in the Sumerian City-State Ur. By the time he was 20 years old, he finished his scribal studies, and set back home to the Sumerian city-state Isin to become a scribe. Upon his return, he discovered that his parents as well as his brother have all died while he was away. He doesn’t know how they died, but he knows that they are enjoying their after lives. Now he is 30 years old, but doesn’t look a day over 20 years. He is quite successful, and is known for his very quick and neat writing abilities. He has dark brown hair and dark brown eyes. His olive skin doesn’t set him apart from other civilians. He wears a tiered kaunake, a linen calf length skirt. He also wears a shawl –like item that was worn by covering the left shoulder and wrapping in around the back, beneath the right arm, over the left shoulder, and once again beneath the right armpit. He wears leather sandals, and is quite handsome.


As I mentioned before, he lives in Isin, a newly conquered state by King Rim-Sin of Larsa. Isin is an urban city-state, and is very lively. Under Rim-Sin, scribal annals prospected, thus Darius becomes more successful than ever.

Darius is always interested in love, and often spends sleepless nights thinking about it. He is amazed by love and its effects, which he hears about from his friend, Ishtar. Ishtar is a scribe as well. Darius sees many beautiful women, but never feels the intoxicating effects of love. He is polytheistic, like other Sumerians. He isn’t particularly a religious man, and only visits the gods at the ziggurat when he needs something. He particularly favors the goddess of love, Inanna. For he thinks that she would give him success in finding love.

Darius is neither rich nor poor, but he is content with his life. He believes in an afterlife, but is determined to love in both lives. Darius is one of the few Sumerians who doesn’t enjoy drinking beer. He doesn’t trust anything that already exists on Earth. That says a lot about his character, it shows that he is insecure and has trust issues. Darius’s diet consists mainly of fish. On special occasions he has some poultry, lambs and pigs. He eats a lot of fruits and vegetables, and grapes are his favorite fruit. Darius lives for one thing and one thing only, to find love.


Some years have passed
and you still cry!
You’re not the only mother,
whose daughter
did prematurely die.
Hide your tears for the sake
of your loved ones,
at the very least, try.
Why are you silent?
You don’t have a reply?

“What should I say?
words can’t easily fly.
If you knew
how losing a child feels,
you won’t ask why.
It’s the most painful loss,
no one can deny.
You want me to pretend
to be happy, perform and lie,
wrap up my feelings
and strap them with a tie,
when my silent cries
reach as far as the sky.
Sorrow is something
I didn’t ask for, nor buy.
It just came to me.
Do you still want to ask
why I still cry?” 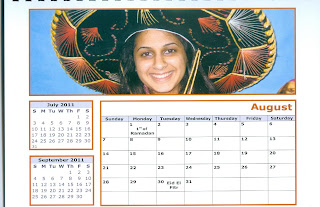