Image Reflected on A Mirror

An experiment to test the properties of an image reflected by a mirror was preformed. The properties are as follows:

The image is a virtual image.
The image is upright.
The image is the same distance behind the mirror as the object is in front. In other words, v = u
Therefore, since v = u, the linear magnification=1.

Through the diagram on the next page, it is shown that a pin(P) was placed in front of a mirror, a relative surface. Two other pins, P1 and P2 were situated to appear collinear with the image of P from a certain angle. The same step was followed with P3 and P4.

The results of this particular experiment seem to have been quite accurate, in exception for the slight difference between the values of u and v. To calculate the relative percentage error, the following formula will be used:
Relative percentage error (observed m-actual m/actual m)*100
Therefore (0.98-1/1)*100=-2.0% error, meaning that error was found to be 2% less than the actual value.

Even though the rays appear to pass through the point P’, they do not as the image is virtual. It is also obvious that the image is upright. As indicated through the following page, this experiment portrays the law of reflection as the incident angle=reflected angle.

Thus it is quite clear that this experiment clearly exhibits the properties of an image formed by a plane mirror.
Samar Al Ansari
Grade 6

Let not the sun too fiercely on you burn,

And while the clouds cover you from my sight,

Author unknown
Posted by Um Samar at 7:50 PM No comments: 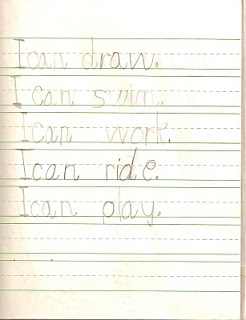 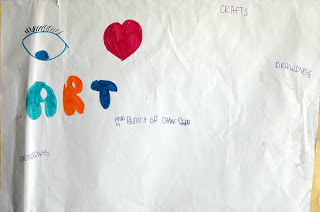 In idle conversation
you ask me about
my children.
You are an acquaintance.
I do not know you well
and so I don a masque,
I speak happily of joys,
light-heartedly of mischief,
but I do not speak
of death.

I do not want to see
the shadow of uncertainty
pass your face.
And feel the
awkward silence that falls
like a curtain between us.
I do not want to say,
"It's okay, that was
long time ago."
It will never be quite" okay"
and sometimes it seems
like yesterday.

And so I take my masque
along with me through life
like a perpetual Halloween night,
to hide just a bit from people
and to preserve my strength.
For mourning is tiring
and each time I recount
that day of death
I am a little wearied.
I would much rather speak
of the joys of his life
than the sorrows of his death,
to strangers
who absently ask
of children.

Yet tragedy is more universal
than ever I had known
before it touched my life.
And so at times I wonder
who else looks out from behind
a masque.

By Karen Nelson
Posted by Um Samar at 4:04 AM No comments:

I know you recognize me,
my most dear
When I whisper “I love you”
in your ear
In a soundless voice
that you can hear
And when I wipe from your face
every tear
And steal a kiss so warm
and sincere
To others, I am gone
it might appear
But for you,
to your heart and mind I adhere
Mother, my physical absence
do not fear
I am always with you,
I did not disappear
Although I am very far,
yet I am so near

I hate it when people criticize, don’t you? Yesterday it wasn’t about criticism; it is about hearing that I was a bad artist from my own teacher. Yes, it hurts. I know I’m not fabulous at art but it kind of hurts to hear from your teacher that I don’t draw well. She didn’t say it in that way exactly; she said I’m only going to choose good artists to do the pot. She chose my friend and my friend asked about me but she said oh, maybe X. She didn’t choose my other friend either. That is how I feel like she likes my other friend more. I’ve been realizing that since a long time. Once I was working on a jar and actually I didn’t start it yet so I wanted the teacher to draw it for me. I kept on saying it over and over again. But she just went to my friend. That sucks, that really does and I hate it!
I like my teacher but she should treat everyone the same way not differently. Maybe I’m over exaggerating but I’m the type of person who gets hurt easily.
Well maybe I should not mind what the Miss thinks.
Samar Al Ansari
2000-2001

Accomplishments: I hope to look down at my accomplishments and be proud.
Samar Al Ansari
Grade 6A
5/9/1999
Posted by Um Samar at 4:04 AM No comments:

Opportunity: I am lucky because I had the opportunity to see my cousins from America twice this year.
Samar Al Ansari
Grade 6A
5/9/1999
Posted by Um Samar at 4:40 AM No comments: 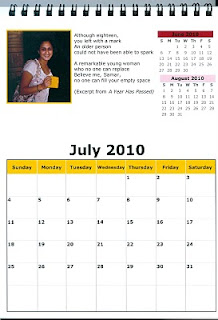