To work in advertising is such an interesting job, because it is the art of brain washing. I hope I have fun tomorrow and not be disappointed in what I see.

There is no joy with the start of a new day
Things are incomplete no matter what you say
My daughter is gone, Oh God why did I have to stay?
I should have gone before her! She should have been alive today
This is what I learnt as the rules of the play

How can a mother outlive her child?
It is something unimaginable, beyond anybody’s mind
My family is incomplete since my daughter died
And my tears cannot bring her back, no matter how much I cried
How can life ever be the same when she is on the other side?

This loss is the ultimate loss that no one can describe
With no limit to its grief, no line to circumscribe
There is no medicine for it that doctors can prescribe
It is engraved in the mother’s eyes, no need for anyone to inscribe
”Loss of a child”, no language will ever be able to transcribe

I drove the old way yesterday
It'd been a while you see,
And there,without a warning,
the pain washed over me.
I drove the old way yesterday
and sadness came on strong,
taken back by so much feeling,
since you've been gone so long.
Places seem to lie in wait
to summon up the tears,
to say remember yesterday,
those dayswhen you were here.
Places where you laughed and played
are places where I cry.
These places hold the memories
that will live as long as I.
By
Genesse Bourdeau Gentry
"Stars in the Deepest Night"
P.68
Posted by Um Samar at 4:04 AM No comments: 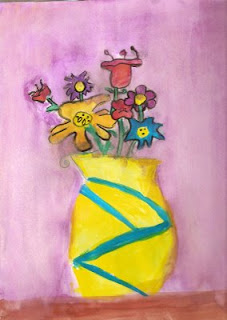 Should the Christian Man and the Muslim Woman Get Married?

We were presented with a moral dilemma, and after consulting emotion, religion, culture, and reasoning, we have come to the conclusion that they should not get married.

As for religion and culture, they strongly forbid the union of the two. It is not allowed by Islamic Law for a Muslim woman to wed a Christian, thus their marriage will not be tolerated. Religion plays a significant role in shaping the ideals and morals of a culture, therefore culture will not tolerate the marriage as well.

They make each other happy, therefore they should get married according to reasoning, because people should pursue happiness. On the other hand, if they decide to get married, society and family will shun them, and the two will have no sense of belonging, creating an identity crisis. In this instance, reasoning dictates that they should not get married.

3 > 2, therefore they should not get married.

Samar Al Ansari and other group members
Grade 12
Posted by Um Samar at 4:04 AM No comments: 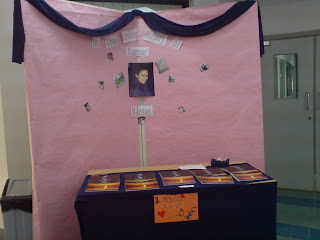 Look for me in rainbows

Time for me to go now, I won't say goodbye;
Look for me in rainbows, way up in the sky.
In the morning sunrise when all the world is new,
Just look for me and love me, as you know I loved you.

Time for me to leave you, I won't say goodbye;
Look for me in rainbows, high up in the sky.
In the evening sunset, when all the world is through,
Just look for me and love me, and I'll be close to you.

It won't be forever, the day will come and then
My loving arms will hold you, when we meet again.

Time for us to part now, we won't say goodbye;
Look for me in rainbows, shining in the sky.
Every waking moment, and all your whole life through
Just look for me and love me, as you know I loved you.

Just wish me to be near you,
And I'll be there with you.

I Am not Walking Alone

Beloved daughter, rest assured that I am not walking alone
Many are grieving for you with feelings explicitly shown
While others prefer to be private and in silence cry and moan
I now realize more than ever Gibran’s words “your children are not your own”
Words engraved in my mind now as well as in stone
The meaning of which I hardly realized the day you were born
I am not alone when I cry for you at the early hours of the dawn
As someone else is surely calling your name in a different time zone
It is incredible how many hearts ache for you and mourn
As you are the most amazing person they have ever known
And the kindest girl with whom they had grown
I wish that you know how much love towards me had blown
And that I was approached by many, even the withdrawn
To tell me how much they miss you since you had flown
And the many times they wished to talk to you and call your phone
Expecting a miracle! To hear your sweet voice with its unique tone
So rest assured, beloved daughter, that I am not walking alone.

This particular incident happened a few years before I was born. My eldest brother was swimming in his friend's pool; he was about two years old. Obviously, my mother was there. My brother still did not know how to swim, so he swam with "floaties". My mother thought that my brother had enough of swimming, so she took him out of the pool and removed his "floaties". After a while, my brother jumped into the pool and started to drown. My mother saw him and jumped into the pool fully clothed and saved him. She was not even a good swimmer, because she never learned how to swim.
Samar Al Ansari
Grade 10.3
Oct 25,2003
Posted by Um Samar at 4:04 AM No comments: 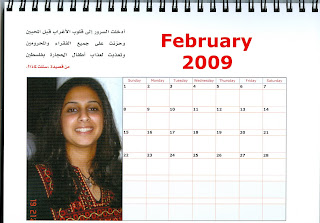