The friend who can be silent with us in a moment of despair or confusion,
who can stay with us in an hour of grief and bereavement,
who can tolerate not knowing...not healing, not curing...that is a friend who cares.
Henri Nouwen

Objective: Demonstrate an understanding of the underlining theme of the novel.

Larry:  Good morning folks, we have a very special guest with us this fine morning, which I’m sure you all know or might’ve heard of.  On the show with us today is one of the survivors of the plane wreck of an uninhabited island just off the coast of Spain, Ralph, the twelve year old Englishman.  How are you feeling this morning, Ralph?
Ralph: I have felt the same ever since I got back.
Larry:  And how is that?
Ralph:  I feel different.
Larry:  Well that’s understandable.  Let me ask you something Ralph, how did it feel to be on an island with a bunch of other kids, with no adult supervision?  I bet you guys want crazy over there?
Ralph:  It was frightening; with the pass of each day I grew more and more terrified.
Larry:  Yes, it is very frightening to be in an excluded world without adults where animals ran free, etc.  Of course you were scared, you were in a strange setting.
Ralph:  I wasn’t scared of the setting Larry, I was scared of us.  Sometimes, I even grew afraid of myself.  I got used to the new setting, but I could never get used to the evil of man.
Larry:  I’m sure if there was adult supervision, you wouldn’t be afraid of your little friends?
Ralph:  Adult or child, man has darkness in his heart.  Everyone has a beast in them, and some of us tame their beasts better than others.  The presence of adults wouldn’t have made a difference.  Look at the adults now, they’re at war; brothers are fighting brothers, for dark reasons.  The innocent and pure ones are dying, while the dark ones grow more powerful.
Larry:  Have you always felt so pessimistic about man, or was this view of man acquired on the island?
Ralph:  I was blinded and couldn’t see man’s real image before I was on the island, but on the island I saw clearly for the first time.
Larry:  Did you start ‘seeing clearly’ on the island since the beginning, or was it towards the end…?
Ralph:  I realized man’s true nature when people started becoming selfish and disregarded important things like the signal fire and the conch.  I kept on telling them Larry, that the signal fire was the only way that we would get rescued, but no body listened to me, everyone was selfish.  As for the conch, it was an item we used in assemblies.  If you held the conch it meant you had the right to talk and to be heard, but people started disregarding the conch, till finally it was destroyed.
Larry:  Why do you think they didn’t listen to you?  According to my information, you were their leader, surely some of the boys listened to you.
Ralph:  At the beginning, everyone was scared and confused, so they listened to me.  But as the days past, everyone became more selfish and did things according to their wants and not their needs.  I made decisions based on our needs, and only four wise boys were my true supporters.
Larry:  Two of your supporters were killed, right? How so?
Ralph:  Two of my supporters, Piggy and Simon, were murdered.  Simon was the only innocent and pure hearted one on the island, and Piggy, was…someone I needed desperately.
Larry:  Murdered by who?
Ralph:  By the beast that laid within all of us, the beast that emerged with the absence of order.
Larry:  Wow, that’s pretty insightful for a twelve year old child.
Ralph:  I am no longer a child Larry, children are innocent.
Samar Al-Ansari 11.5
Oct. 1, ‘04 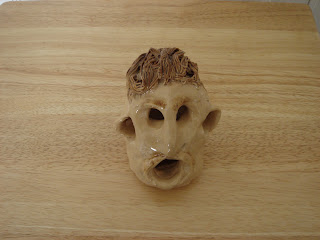 How can I give away your clothes?
When each piece with you, I chose
I remember when and where each was bought
And the happiness then to you, it brought.
I hold them dear, close to my heart.
They are what remained since your sudden depart.
So how can I give your clothes away?
I want every single piece to stay.
Beautiful memories are engraved in each piece.
I will not give them away, I will not release
I remember every occasion that you wore each shirt,
And reminisce over each dress and skirt.
A priceless treasure you left me to keep,
That warms my heart but makes me weep.
I couldn’t have imagined when we got you a dress,
That one day I will hold it to caress.
Randah R. Hamadeh, Copyright©2011
Written in loving memory of my daughter
Samar Ahmed Al Ansari (4/4/1988-4/9/2006)
Posted by Um Samar at 4:04 AM No comments:

Join the Compassionate Friends in Lighting a Candle at 7 pm today in memory of Samar and other children who have died.
Posted by Um Samar at 4:04 AM No comments:

History of the Letter M

M is the thirteenth letter of the English alphabet derived from Latin.  It is also the thirteenth letter of the ancient North Semitic and Estrucan alphabets.  The Semites were the ones who lived in Syria and Palestine.  They named it mem, their word for water, and adapted an Egyptian hieroglyphic or picture symbol for water.
The shape of the letter m derives from the early North Semitic and Phoenican forms, from which the Greek m (mu) involved.   Through the Estrucans, the Greek form was taken over by the Romans and handed down to the present-day alphabet.
Samar Al Ansari
Grade 7
Posted by Um Samar at 5:56 PM No comments: