Grief fills the room up of my absent child,
Lies in his bed,walks up and down with me,
Puts on his pretty looks,repeats his words,
Remembers me of all his gracious parts,
Stuffs out his vacant garments with his form;
Then have I a reason to be fond of grief.

Deeply concerned about the harsh lifestyles some citizens lead,

Deeply conscious of each individual’s right to live and thus stating that this right should be preserved,

Emphasizing the fact that lives are being lost around the world due to lack of access to affordable drugs,

Aware of the fact that pharmaceutical companies are business organizations looking for profit,

Noting with deep concern that a significant amount of individuals in underdeveloped nations, such as those on the African continent, are losing their lives to Aids;

Declaring that human life is more important than profit,

Convinced that in the long run, the international community as a whole will be better of because by giving the sick access to medication, it will prevent the disease from spreading

Noting with satisfaction that generic drugs are identical, or bioequivalent to a brand name drug in dosage form, safety, strength, route of administration, quality, performance characteristics and intended use,

1. Calls upon pharmaceutical companies to lower the prices of life saving medicine;

2. Requests for capable governments, business organizations, the UN, etc. to subsidize pharmaceutical companies in order to make up for their losses;

3. Encourages both the production and selling of cheaper generic drugs;

4. Further invites governments to launch media campaigns promoting the use of generic drugs in order for it to be clear to citizens that these drugs are safe;

5. Emphasizes the need for aid to be given to under developed countries in order for their governments to deal with such issues accordingly;
Aid could be given through the form of:
a) Donations
b) Loans

6.Urges countries and organizations to donate food and drink to the diseases, because it helps keep their immune system strong. Dehydration from diarrhea is still one of the leading causes of death in underdeveloped countries, and thus by having access to clean drinking water their lives could be elongated;

7. Encourages nations in promoting the use of alternative medicine,

8. Recommends the creation of emotional support organizations, because part of the healing process is emotional;

9. Notes that although medical supplies are limited, supplies such as injections should not be used on more than one patient because that will just cause the disease to spread;

10. Reminds nations that as it is important to solve problems, it is also important to prevent them. Thus, together the education facilities, media, and governments can work together to spread awareness on various diseases;

11. Further recommends that contraceptives such as condoms should be distributed and be easily available in order to prevent sexually transmitted diseases;

12. Calls upon nations to encourage its citizens to take blood tests in order for every citizen to be aware of the disease he/she carries;

13. Reaffirms the need of a mass media campaign to spread awareness on fatal contagious diseases;

14. Recommends bulk buying, this involves several countries getting together to make purchases of HIV Aids treatments, this will help to reduce prices in the countries;

15. Urges pharmaceutical companies to sell their drugs directly to WHO, and the WHO will distribute the drugs accordingly; 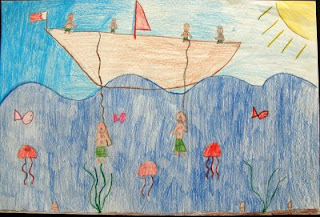 Account for the final success of the Communists over the Guomindang despite efforts by the Americans to intervene.

The unification of the Communists and the Guomindang against the common enemy, Japan, in 1937 was not strong enough to prevent civil war between the two leading political parties. No one would have predicted the victory of the Communists due to the many advantages the Guomindang had over them. The United States desperately did not want the Communists to seize control of China, thus it assisted the Guomindang in several ways in order to help them gain control over the Communists. Firstly, it provided them with military equipment and weapons. For instance, the United States Air Force organized an airlift using highly sophisticated C-54 planes in order to fly the finest Guomindang troops to key Chinese cities such as Nanjing, Shanghai, and Beijing. By gaining access to these cities, the Guomindang was able to control almost half the cities in Manchuria as well as other cities. The Guomindang were also assisted financially, for they had received 200 million dollars from the U.S. Also, the large American equipped Guomindang army was highly trained by the U.S. In addition to U.S. interference, the Guomindang had a larger army than the Communists, and it held all the big cities and main railways, while the Communists were a weak force that controlled only country side areas. Thus it came as a surprise to many, that the Communists emerged victorious.

Although the Guomindang were advancing, to the extent that they captured the Communist capital of Yanan, they lacked something the communists had-Lin Bao as a leader. The Communist party (later known as the People’s Liberation Army), approached new methods of warfare. They began to focus their attention to guerilla warfare, an alternative that seemed attractive in comparison to their previous techniques. Guerilla warfare consisted of night raids against Guomindang bases, destructing railway lines, ambushing patrols, and other types of unconventional forms of attack. By using such methods, the PLA were able to control much of central and northern China, forcing the Guomindang to go on the defensive. As the Communists acquired more land, its members grew, due to the extensive amount of peasants who began to join the Communists, due to the attractiveness of Communist policies concerning land and loans.

The economic conditions in the Guomindang held cities began to worsen greatly, for rapid inflation was destroying the purchasing power of the consumer. Not only did consumption decrease, but so did labor, due to the amount of strikes held. In addition, many turned to robbery as an alternative to the high prices. As a result of the bad conditions within Guomindang held cities, many began to turn to the Communists. The Guomindang’s grasp on its people began to loosen and it had to turn to its Blue Shirts to keep the order. But there was no use; the Guomindang itself was growing weaker as a political party.

In 1947, the United States recognized the weakness and coming collapse of the Guomindang, thus it cut off all aid, weakening the Guomindang position even further. At this point the PLA was large enough to abandon its guerilla tactics and turned to attacking tactics. In 1948, the Guomindangs and the PLA had the ultimate face off at the Battle of Huai-Hai, which led to the loss of more than half a million Guomindang troops and equipment. This defeat allowed the PLA to move freely, which led them to capture Beijing, Shanghai, and Guangzhou. Finally, in October 1949, the Communists proclaimed the existence of a new, different China-the People’s Republic of China.

In the dream, Haas, 3 years old
Fearful, tearful
His body stretched tensely
Around my neck his hands held harshly
His small legs trying to reach around me
He held tightly, glued to me firmly

The dream was true, he was alive
I hushed his cries
I wiped his tears
We were one, he and I
A circle of bodies clamped together
Against the cruel and the unjust

They tried to pull him away
But could not divide
They tried to push us apart
But we were still one part
They had to strip off my skin
that was the only way.
For son and mom to split
To take him away
Wrapped in his mother’s membrane

The pain was great
I was awake.
By Najwa Mounla – Haas’s mom
Posted by Um Samar at 4:04 AM 1 comment:

Subah wrote in the 2007 IKNS Yearbook:

samar: irreplaceable,no words will ever be able to express it.ur more alive than ever, in every single one of us. Allah yir7imich yal'3alya.

If only you knew that these words apply to you as well dear Subah.
Um SAMAR
Posted by Um Samar at 4:04 AM 1 comment: 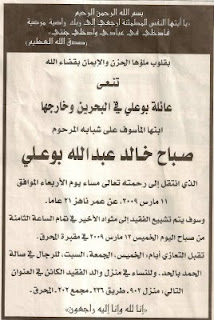 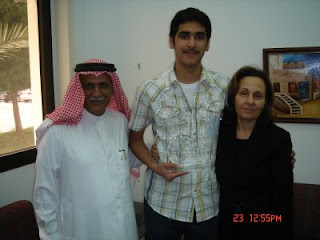 A letter by our househelp to SAMAR 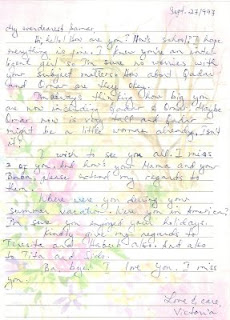 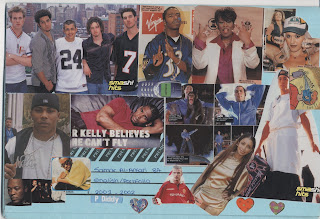 “I Grieve" by Peter Gabriel

did I dream this belief?
or did i believe this dream?
now i can find relief
i grieve

http://www.azlyrics.com/lyrics/petergabriel/igrieve.html
You can hear the song at:
http://www.youtube.com/watch?v=iQzU-PJ_eAY
Posted by Um Samar at 4:04 AM No comments:

But tell not Misery's son that life is fair. 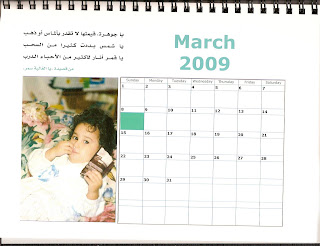